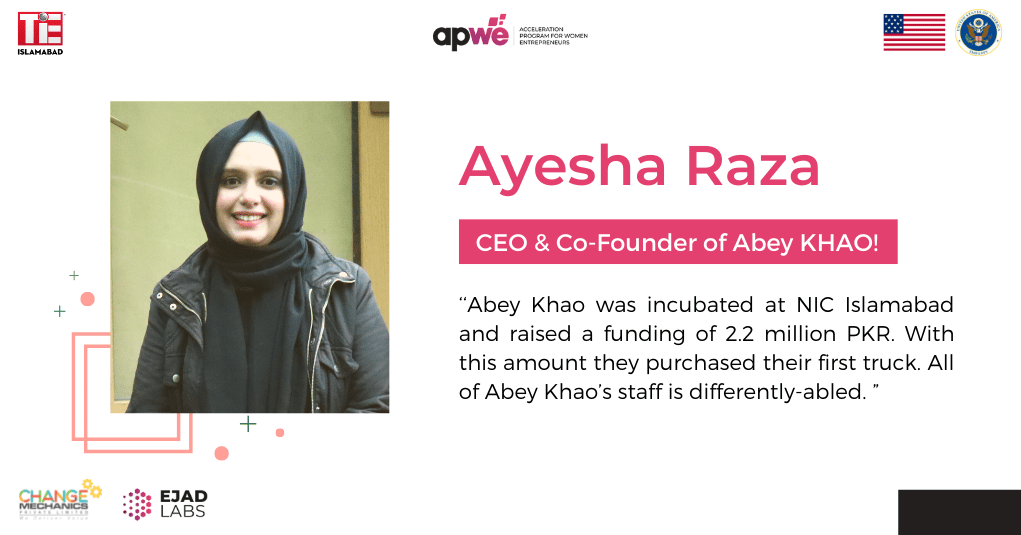 Abey Khao which literally means “Hey Eat!” in Urdu language, is the name of the only fast food cafe in Pakistan that is founded and run by the deaf community. It is a food truck cafe situated in two distinct locations of Islamabad. It aims to enhance the social inclusion of the deaf people in the country. It is empowering deaf youth by creating enterprise and employment opportunities for them in the hospitality sector.

Ayesha Raza, the founder of Abey Khao, is a contestant of APWE (Acceleration Program for Women Entrepreneurs). APWE is an initiative for women who are operating a business or partnership, a social enterprise or indigenous enterprise, supported by the US Embassy in Pakistan in collaboration with TiE Islamabad, Change Mechanics and Ejad Labs.

Childhood and the Deaf Community

Ayesha grew up in a community of deaf people. Her father was a tailor by profession who despite his deafness and minimal income, managed to provide education to Ayesha and her two brothers. Her mother, who was hard of hearing, had big dreams for her children just like her dad. Both of them were persistent in letting them choose their own professional paths. Ayesha’s brothers were also hard of hearing and she was the only one in her family who was not differently-abled. This did not mean that she was given any more importance than her brothers. They were all equal in the eyes of their parents. Her parents strongly believed that all of them were going to do great things in life. Ayesha, who is a bioscientist by profession, says that outside their family, everyone else believed that she was going to be the only one who would succeed in life.

Growing up, Ayesha saw not just her family but also the entire deaf community being discriminated against. There were not enough employment opportunities for deaf people although they were equally capable as any other ordinary person. In an interview with the Guardian Abey Khao’s co-founder and Ayesha’s brother Sheikh Faizan Raza said, “The main reason behind this initiative (Abey Khao) is to provide an identity, a sense of independence and livelihood opportunities for the deaf community as we are discriminated against in Pakistan and treated as if we are sons of a lesser God”. Ayesha says that socially families hide that their child is differently-abled in the fear of being pitied upon but this further separates them from the mainstream society.

Differently-abled People in Pakistan / Across the Globe – Employment, Capacity Building and More

According to the World Health Organization, 5% of the world’s population has some hearing loss. Although there are no stats on the number of people with hearing impairments in Pakistan, there were over 0.371 million PWDs (People With Disabilities) as for the year 2020 according to Pakistan Bureau of Statistics. “There are a handful of organizations that train PWDs but our hiring is not inclusive of these people.” said Ayesha while talking about the state of unemployment of differently-abled people in Pakistan. This opinion is validated by the fact that there are insufficient federal laws that could bind organizations into ensuring equal participation of PWDs in different hiring domains. In July 2020, the Supreme Court of Pakistan directed the federal and provincial governments to take steps to fully realize equal participation of people with disabilities. The court ruling was in response to a petition from a person with a disability denied a job as an elementary school teacher in the city of Multan.

In response to the ruling, the federal government passed the ICT Rights of Persons with Disability Act, 2020 which was the first federal law demanding inclusivity for PWDs. In an interview with the Guardian, the co-founder of Abey Khao Sheikh Faizan Raza said, “Too many people in Pakistan think deaf people are only meant to do lowly jobs, such as sweeping and cleaning.”. Ayesha also believes that hiring is a huge obstacle for people with disabilities in Pakistan. The companies are reluctant in giving them a chance and even if they do hire them, their wages are not good. “Empowering does not only mean to build their capacity but also to ensure that they are landing at jobs afterwards.” says Ayesha. “We need to shift from our charity model to an empowering model. PWDs need to have their own means of income.” she added.

The Idea Behind Abey Khao

Ayesha says that her brothers went to the US for a program that was organized for hard of hearing and deaf people. “There they saw the culture of food truck cafes and instantly became fascinated with it.” says Ayesha. According to the IBIS, the market size, measured by revenue, of the Food Trucks industry in the US is $1.2bn in 2021. A food truck is a large vehicle that is equipped to preserve, cook, prepare and serve food operating mostly as a take-away cafe. The concept of food truck cafes is fairly new in Pakistan but Ayesha believes that the model is far more affordable than a mainstream brick and mortar one.

“Despite their hearing loss, my brothers were excelling in their fields. We were all doing well in our professions.” she said. She says that when her brothers thought of bringing the food truck concept to Pakistan, they decided they would come up with a model that would in some way empower their own community. Hence the lack of employment opportunities for people with hearing impairments, the discrimination they face in the society and the admiration for the concept of food trucking gave birth to the idea of Abey Khao.

Abey Khao started as a push cart in 2016. Ayesha says that it was located at a hidden place of Islamabad and people barely knew about it until they were featured on Express Tribune’s front page. “This was a life-changing event as people started to appreciate our efforts and we were getting great feedback.” says Ayesha. They had to shut down in 2016 for six months due to restrictions on push carts imposed by the government. They did not lose hope. Rather they officially kickstarted their business again in 2018. Abey Khao was incubated at NIC Islamabad and raised a funding of 2.2 million PKR. With this amount they purchased their first truck. All of Abey Khao’s staff is differently-abled.

In the beginning, Ayesha and her brother designed the menu and trained the whole team. They were well-versed in sign language having been raised in the deaf community. Abey Khao recruits deaf/hard of hearing people as interns on a small stipend. The already trained staff then trains the interns before they are recruited as full-time employees. Abey Khao regularly organizes capacity building workshops for its employees as well as deaf people outside of their organization. There is a guide board outside the cafe which helps the guests in ordering their food with the help of sign language. It is also an attempt from the side of the founders to include deaf people in the mainstream discourse by teaching sign language to ordinary people. “We love that our customers communicate through sign language but we also want to save their time. That is where technology comes in. We wish to utilize technology in order to facilitate both our customers and team.” says Ayesha.

Street vending has remained unregularized for a very long time in Pakistan. Social activists and development economists have for long stressed the need to regularize the business of street vendors. In an attempt to bring street vendors into the tax net, Metropolitan Cooperation Islamabad collaborated with Ehsaas programme and PIDE (in the recent past) for implementation of an intervention plan for streamlining street vending. The move was hailed by the premier but street vendors’ inclusion in the economy still remains highly scarce. Speaking of this, Ayesha said, “There are so many food businesses that are operating unregistered. This affects businesses like ours which are registered.”

Abey Khao by nature is a social enterprise but Ayesha believes that they do not get enough support from the public bodies. “Everybody talks about lack of funding. I believe it is more about ease of doing business. For example there should be brackets/caps for building rents in accordance to the type of business. This would help the business owners a great deal.” she added. “I believe that there should be a legal status for social enterprises in Pakistan and the government should focus more on impact driven businesses.” says her.

Ayesha says that there is a lot of mocking and discrimination that her workers have to face. People make fun of them for their deafness which is something they wish to eliminate through normalizing interactions between differently-abled and ordinary people.

“People sometimes say mean things like we are benefiting off of people’s disabilities which is quite sad.” said her. Abey Khao is about giving people a perspective of looking at differently-abled people and not thinking that they are any less. The very idea of Abey Khao is to empower the deaf community. Currently, the cafe is located at two places in Islamabad. Ayesha also aims to include more female deaf workers in her business, which is one of her long term goals.

Abey Khao is all about creating safe spaces for deaf community of Pakistan. The founders aim to expand it in other cities of Pakistan and in the next phase want to franchise it. The franchising would only be done with the deaf people in order to make the community financially independent. Ayesha believes that APWE will help her in raising funds as well as help her startup to go global. The funds could be used in expanding in areas discussed before.