After an intensive two day competition in Islamabad where around 50 mentors brushed up the business plans of the 130 participating teams. The ferocity of competition reached a climax when we witnessed two ties and instead of 25, 27 teams moved ahead to next round from the capital of Pakistan.

Startup Cup continued its quest to find the Top 25 teams from Lahore. The battleground chosen was Avari Hotel where entrepreneurs with their tech, design and biz dev teams gave each other a tough competition for two consecutive days. Even though the format was same, the excitement and thrill was two folds. One could see the diversity of skillset, richness in ideas and the passion to succeed in the aspiring entrepreneurs. Zeeshan Shahid Senior Program Manager TiE Islamabad summed it up nicely by stating 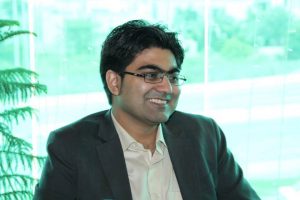 Young people are full of innovative ideas and energy. To see those ideas through, entrepreneurship is an excellent way to harness their energy. With StartUp Cup, TiE Islamabad aims to increase the quality and quantity of entrepreneurs in Pakistan, especially among youth. There is immense entrepreneurial talent in the country and I am glad that through initiatives like StartUp Cup and with the help of US embassy we have been able to provide opportunities to budding entrepreneurs.

Lahore with its much richer cultural diversity and better exposure to entrepreneurship (primarily because of abundance of incubators, accelerators and co-working spaces), the teams were much more advanced,  with more polished business plans. However, room for improvement is always there because the quest for the best demands persistent efforts over a prolonged time.

Guiding the entrepreneurs in the right direction is the true essence of mentorship. Murtaza Zaidi ensured that the highest level of mentor-ship was provided to the participants and for this purpose a Mentor’s Orientation Session was conducted in which 50 plus mentors participated.

Let’s have a sneak peek at what the city of Lahore offered to Pakistan Startup Cup! Interestingly, this time we saw some familiar faces who were a part of previous edition of Startup Cup. For example, in Islamabad, it was Daastan and from Lahore we saw Wajiha with Affordable.pk

Other teams which caught our attention were BeautyHooked.com who were enabling people to book beauty salons at discounted rates. BookMyUmrah was making Umrah convenient. At one place, there were Car Chabi Team talking about how they are making your cars safer and at the other corner was Team ChaiChowk refreshing people with a combo of strong tea with soft melodies. Talking about jewellery and handicrafts, Folkmarket.com was doing a good job. Even the domain of education was well tapped. Nearpeer with their 1400 beta users and TutorCiti with an automated fully developed portal gave each other a tough battle!

What makes the whole scenario very interesting is that mentors found it just way too difficult to choose who the Top 25 should be. Yes! You guessed it right, we had a tie once again and 26 teams moved to Round 2 from Lahore. Here are the names of Top 25 (26 actually!) from Lahore Mr. Salim Ghauri Founder and CEO NetSol was the special guest who awarded the certificates among Top 25 startups. The event was attended by approximately 103 aspiring entrepreneurs team and 50 plus mentors.

We were amazed to see a 9 year old girl, Zylam, who came up with idea of designer bags. Even though, she couldn’t make it to the top 25 but still she holds the record of being the Youngest Entrepreneur who participated in Pakistan Startup Cup. Salim Ghauri gave her a special Certificate of Appreciation. 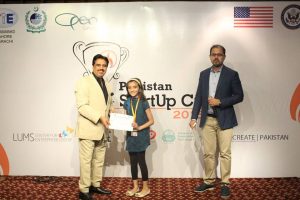 Next two workshops would be held on following dates