Tech-based food startups became a reality a few years ago and have been increasing ever since then.

Over the past few years, whether it is spending more time away from homes, surviving hectic schedules through wakeful nights, or coping with work stress, the untimely food cravings have gradually made their place in our lifestyles.

Besides this, as a nation, we have always been known as enthusiastic foodies. We want a variety of food at home; hot wings for rainy days, brownies for birthdays and biryani for Fridays. Such milieu was ripe for the rise of food delivery services.

They bring delicious cuisines from our favourite restaurants to our tables on just a click. In Pakistan, we have seen a rise in food-delivery startup services. Today Eatoye works under its own brand name and old management as a part of Foodpanda. Foodpanda is a global name, a division of a German owned company, “Rocket Internet.” In 2012, it started its operations in Pakistan.

E-commerce: a game changer for start-ups and businesses

Eatoye on the other hand was launched by two Pakistanis, Rai Umair and Nauman Sikandar, in 2013. In early 2015, we heard rumors of Eatoye being acquired by Foodpanda. Later the news was confirmed by both the companies. Consequently, Foodpanda further expanded its market and became a giant name adding about 1000 more restaurants to its existing list.

How to use Shopify to Grow Your Business

The services offered on the websites of both the companies are nearly the same from providing the very basic “select your area” service to advanced “live chat” service for customer support. A problem faced by the users was entering their location or area on the website, the system on the website usually could not identify the one mentioned by users and failed to search the restaurants.

I remember using Foodpanda to order food at H-12 sector, Islamabad. Upon repeatedly mentioning h12” in the search bar and facing problem, we almost dropped the idea of ordering food when fortuitously; one of my friends typed something that the website finally accepted.

The difference was entering a capital “and putting a hyphen between H and 1 really? Who cares about the caps lock and punctuation when you are high with friends waiting to party!

Not very different was the case with Eatoye, they wanted the users to be good at spellings because always had to be written the same way if you wanted food.

As we see the websites now, Eatoye has resolved this delivery area input problem. When you set the city to Islamabad and write a small h in the search bar, it knows you are talking about H sector Islamabad. 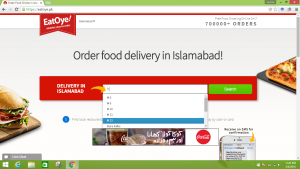 Unfortunately, Foodpanda still wants to stick to old school English rules; it would not give you any food unless you accurately put “H-12”. We would like Foodpanda to be less of a grammar snob and more of a food service. 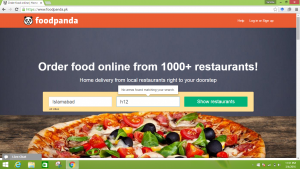 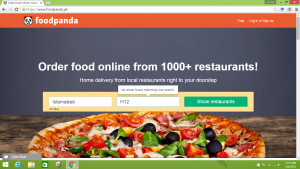 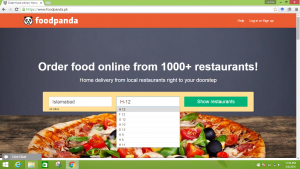 What if the hunger pangs hit late at night and you order the food online? Your order gets through, you start waiting for the delivery boy to ring the doorbell but rather your phone rings, the voice on the other side says,

“Sorry sir, no food…because the restaurant you ordered from just closed a few hours ago.”

“What! How come the website accepted my order then?”

To avoid such a disappointing situation the order taking hours of each restaurant must be stated on the website.  They like accepting all orders and then personally calling the customers to tell that the restaurant just shut down.

“Well sir, would you like to place another order?”

“No, I stick to my kind of burger from Roasters only!”

While the customer service at of both the companies is quick, offering an option at the end of the conversation. The answers provided by FoodPanda customer support staff were more precise. Eatoye needs to do some working here to train the customer serving staff at live chat.

E-commerce: a game changer for start-ups and businesses

The restaurant lists on both the websites keep on changing; the restaurants are added and deleted on weekly basis. Though the addition part brings variety, we do not much like the deletion part.

I remember trying a new restaurant from Foodpanda’s list and loving the taste. When the very next week I wanted to have the same food with my friends, I could not find the restaurant on the list. The restaurant was added again, to the list, next month.

We would like these food services not to be very cranky with the food chains and at least maintain stable connections with them.

Both the companies should make their delivery men competent, after all the customers only have a direct interaction with the company through them. Building a strong delivery team will also help raising better customer relations.[/mks_pullquote]We expect the delivery men to come with fresh food and the receipt of order. The delivery men from Eatoye are a bit less professional; sometimes they forget the receipts at the restaurant and sometimes forget to bring the toys along with McDonald’s happy meal. Other times, they call from multiple numbers to deliver the order; we surely do not want to know how many SIM cards they own!

Foodpanda delivery men, though still not as efficient, are comparatively better.

Therefore, deciding from where to order depends on what compromises you can make. If you can wait for more than an hour to have your food and if receipts are not an issue, go for Eatoye. If you want to try new restaurants each time, check Foodpanda’s much more volatile restaurant list. If you are a strict grammarian or an English teacher, Foodpanda may be a better option.

The food delivery service pie is being hungrily looked at as many new, amazing startups are entering this space.

Till now, Foodpanda and Eatoye have enjoyed a bigger portion of this pie. If the two companies wish to maintain their monopoly over the market, they must learn some practical lessons and follow-up the customer feedback to improve on their weak points. The chinks in the armour of these giants provide a perfect opportunity to the young and scrappy startups to enter this lucrative area. The younger ones will not take much time to grasp this opportunity and hence distribute the pie among them.