Finding Innovative and Creative Solutions for Society-FICS, was founded in late 2013 at one of the most renowned universities of Pakistan, NUST. Initiated at the NUST School of Electrical Engineering and Computer Science (SEECS), in 2014 the idea of FICS was expanded as an intra-NUST competition in which students from all departments of the university could participate and present their ingenious.

The aim of this initiative is to instil a spirit of social entrepreneurship amongst students, encouraging them to convert their creative ideas into value-adding solutions and thereby benefit themselves and society. It bridges the gap between the industry and the academia by linking together the two sectors through a variety of projects.

The concept of FICS is fully aligned with the Pakistan Vision 2025 and with the Sustainable Development Goals (SDGs).

The competition not only inculcates an entrepreneurial spirit among the students but also develop among them the responsibility to act as active leaders for community development and nation building.

The judges at second stage include Industry partners; they assess the impact and practicability of the project ideas, as well as their ability to be commercialized.[/mks_pullquote]Project Manager at NUST Corporate Advisory Council (CAC) and focal person for FICS, Ms. Qandeel Nawaz, explained that FICS is a multi-stage competition which involves 3 stage spread from Nov-June every year. In Stage 1, student teams submit project synopsis of their unique ideas with positive social impact. Ideas shortlisted in Stage 1 make it to the next stage. In Stage 2 the student teams present their ideas to a wider audience in the form of posters and videos. In the 3rd and final Stage of the competition, the teams shortlisted in Stage 2 present working prototypes of their solution (alternatively, students can display plant design, equipment design, product design or process design). The judges evaluate the prototypes on various parameters and select the best 3 projects, which are given, cash prizes.

As soon as the first stage of the competition commences, a series of workshops and seminars starts at different departments of the university. These seminars are referred as “Idea generation sessions”.

Idea generation sessions give students a chance to take motivation and learn from experts who have been innovating for years.

Industrial members are invited to give talks about their field of work, challenges faced, and areas that need improvement. The sessions appeal the students to consider daily life problems around them and think creatively with their knowledge to propose solutions. 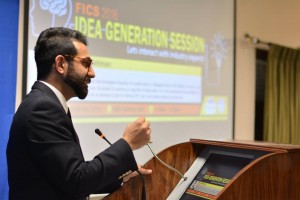 FICS provides equal opportunities to students of every field at the university. he teams, even, can have non-Nustian members but the team lead must be a student from within the university. All the Engineering, Biological Science, Environment, and Business related ideas are accepted and judged under one a single category. However, to address one of the major problems largely faced within the country, FICS 2015 introduced a new category called “Counter Terrorism”. Apart from being creative, the startup ideas should be focused to find solutions of the emerging and significant social problems. The introduction of this category very well served the intended purpose.

The winning idea for counter terrorism at FICS 2015, “Omnes”, was put forward by four enthusiastic students who introduced a mobile application that provided an integrated solution for on-demand identity verification in real time. 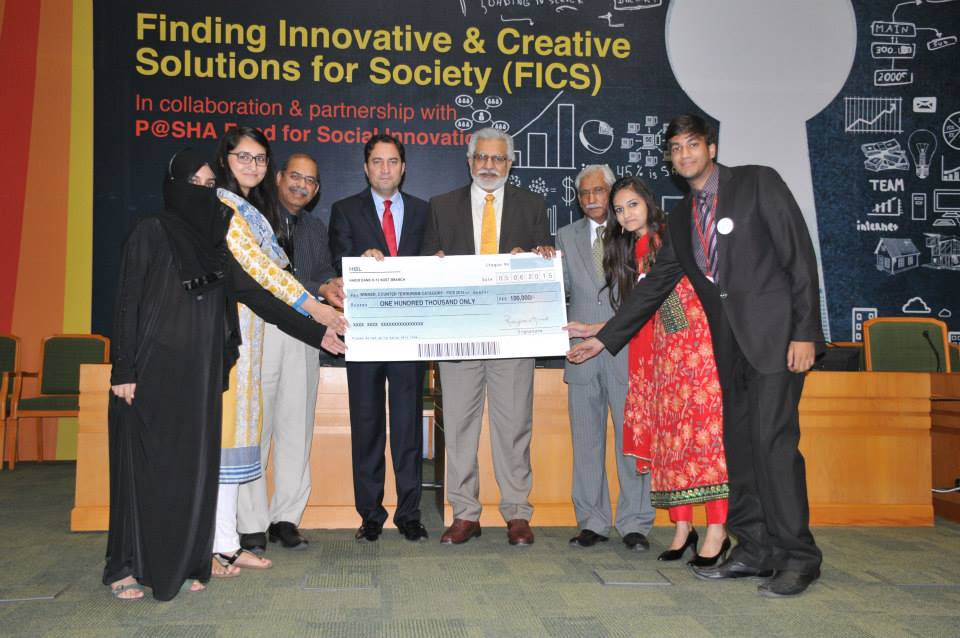 The winning idea of 2015 FICS, “Lithomatic”, proposed a cost-effective and safe device for the non-surgical removal of kidney stones whereas the first runner-up idea, “Trequant”, proposed a wearable device that could diagnose and track tremors in a patient.General health issues have long been prevalent and for the past years rapidly rising in the country, one of the big reasons for such poor state of health is the lack of treatment options.  Yet the students at FICS 2015 very intelligently identified this need by providing technology based health care solutions.

FICS 2016 is co-organized by NUST and National Textile University (NTU). The ideas for first stage of FICS 2016 have been approved and range from as diverse as an automatic dish washing machine to production of herbal lozenges. The second stage of the competition is expected to take place in the first week of April 2016. According to the plan, the idea generation sessions have been started and are taking place on weekly basis. May the best team win!

FICS has covered a long way from being a competition at one department to being expanded throughout the university. Each year we aspire to take it one step further” – Qandeel Nawaz

FICS brings together the four important elements of the quadruple helix model Academia, Industry, Government, and Society. The university hopes that the outcome of this platform would be in the form of high-social-impact products and services that will eventually contribute to socioeconomic development at national level.

One response to “FICS-The Platform for Ingenuity”